Meld is an application to compare files and directories and merge them (“join them?” For lack of a better word). It is part of the GNOME project and its core applications. In my days as a KDE user I used a similar tool: Kompare.

I have not used tools of this type for a long time, usually with the Git commands I solve all the diff and merge problems. But there are cases where we have to work with files outside of the repository, or outside of version control, and these tools come handy. Recently it came in handy for me when processing open data in CSV 😀

Meld allows us to compare up to 3 files at a time, showing the changes and allowing us to send the changes from one file to another. It also has the ability to compare directories, but I haven’t really used this feature yet. It also supports version control systems including Git, Mercurial, Bazaar and SVN and basic commands like commit / update / add / delete files.

One feature I needed at the time was to ignore changes in spaces. Having hundreds of changes and they are all indentation or different line breaks is uncomfortable, so I was looking for how to see something like git diff -w.

In the help of the official site he spoke of a Preferences menu to configure the spaces, among other things. I was looking for a long time until I felt very stupid: mrgreen:. The point is that in the current GNOME guidelines, some menus (Help, Exit, etc) were moved to the applications menu, and there I was able to activate the ignore white space from the text filters: 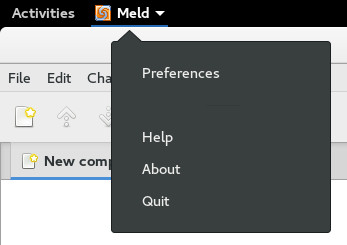 Meld is available in most GNU / Linux distributions, so we can install it from our package manager. There are also versions available for Windows and OS X. Obviously it is free software, licensed under the GPL v2.